I’m delighted to welcome historical author Juliet Greenwood onto my blog today. Juliet is sharing an interview with Juliet from her latest novel, The Ferryman’s Daughter.

Can Hester help her family escape desperate poverty and fulfil her dreams?

1908: Hester always loved her mother best, her father had always been a hard man to like, spending more time (and money) in the local than with his family. When her mother dies suddenly Hester is placed in the position of care-giver for her younger brother and sister, only for her father to get badly injured in an accident.

As the years pass it is only Hester who can keep her family afloat, now rowing the ferry night and day to keep them all from starvation, she sees her dreams of working in a kitchen and one day becoming a cook, slipping further and further away.

But just how far is Hester willing to go to make her dream a reality? And as the threat of war comes ever closer to the Cornish coast, will it bring opportunities or despair for Hester and her family?

Interview with Hester Pearce, the heroine of ‘The Ferryman’s Daughter’

Thank you Hester, for taking time out of your busy day. I can see the kitchens at a big house like Afalon are never quiet, especially now it’s a convalescent home for soldiers. I’m glad we’ve been able to retreat to the kitchen garden, Cornish afternoons are so beautiful this time of year. This must be such a good place to work.

Oh it is. I love working at Afalon. My grandmother used to be cook for the family here, when it was a private house. I never thought I’d get the chance to follow in her footsteps. Of course, I probably wouldn’t have been taken on, with so little experience, if it hadn’t been for the war.

Can I first ask you what first made you become a cook?

It was my mum who first made me interested in cooking. She was a wonderful cook. Even when we didn’t have much money she could make a tasty meal from practically nothing and things she gathered from the hedgerows. She taught me everything I know. And she was the one who always encouraged me to follow my dreams and never take second best.

I understand you didn’t start your working life at Afalon. Can you tell me more about the years you rowed the ferry across the Hayle Estuary? That must have been hard for a young woman.

It was hard, but I didn’t have much choice when Dad was injured, I couldn’t see my little brother and sister out on the streets. Most of the time I really enjoyed rowing passengers from one side to the other. It gave me independence, and I soon learnt how to deal with any young man who tried it on, like they do. It doesn’t half help if they know you can tip them into the river if their hands start wandering!

It sounds as if your independence is important to you.

Oh, it is. Definitely. My dad’s always trying to get me to marry Jimmy, but that’s only because Jimmy buys him pints down the Fisherman’s Arms. I love Dad, and I know he loves me in his way, but he always put his own needs first, he always has. I don’t want to hurt him, but I’m not marrying for his convenience, and especially not for pints! And I know what it would be like if I married Jimmy. Mum had a dream of running a cafe of her own in St Ives, but she never had a chance with washing and cleaning and always being pregnant. I don’t want that to be my whole life, and especially not with a man I could never love and doesn’t love me, not really. I can see Jimmy just wants a woman he can boss around and lord it over and make him feel strong and important. To be honest, he’s so obsessive, I’m not sure he’s right in the head. He scares me sometimes. And he’s so certain he’s going to win and have me at his beck and call for the rest of his life. When I rowed the ferry, at least I had control over what I earned. Once Dad insisted Jimmy took over I never knew what money was coming in to feed them all, and if there would ever be enough to cover the rent. I don’t want to live like that for the rest of my life. I’d rather make my own way, however hard that might be.

So that is why you became a cook?

Yes. When Miss Chesterfield bought Afalon and turned the house into a convalescence home for soldiers injured in the fighting in France, she needed a good plain cook. Things were getting difficult at home, especially as Jimmy just wouldn’t take no for an answer and Dad didn’t see why I didn’t do what he wanted, so I couldn’t stay at home any more. So working for Miss Chesterfield offered me a lifeline, especially being a live-in post and being able to earn enough to make sure my brother and sister were looked after.

You must have found it upsetting with so many injured men arriving? Especially that time early in the war when the main hospitals were overflowing and it took men straight from the battlefield.

That was heartbreaking, especially when the men were being brought straight from the trenches and the front line. You’ve never seen anything like it. But the nurses and the VADs were wonderful, even though they’d never had to treat such injuries before. We all pulled together, and I least I felt I was doing something, providing them with good nutritious meals with the vegetables from the kitchen garden to help them recover.

And how do you see the future?

To keep on working as a cook. And, if I can, open a cafe of my own in St Ives, one day, once this war is over. Just like my mum wanted to do, but never had the chance. I know the place. It’s the one Mum would have taken over, if she’d been able. There used to be summer visitors and artists, I feel so sure I’d be able to make a success of it. And I’m not going to give up, not for anything.

And romance? Is there someone special for Hester Pearce?

I so wish I could say yes. But it’s quite impossible. There’s no point in even thinking about it. Even if he survives the war… Anyhow, I’d rather not talk about it. There’s so much sorrow already, with so many men lost, why should I be any different? I’m just going to have to make the best of it, and make my own way in life.

Thank you, Hester. I’m sure with your determination you will succeed. Good luck!

What readers are saying about The Ferryman’s Daughter:

‘This was a superb read, and I thoroughly enjoyed every moment.’ Being Anne

‘Bursting at the seams with courage and rebellion, and with women smashing the boundaries to become so much more than anyone previously thought they could be.’ The Book Babe

‘A gripping historical well-paced family saga that sweeps the reader along.’ Judith Barrow

It sounds a great read, doesn’t it? You can purchase the book here: 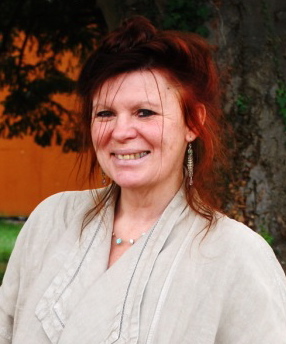 Juliet Greenwood has always been a bookworm and a storyteller, writing her first novel (a sweeping historical epic) at the age of ten. She is fascinated both by her Celtic heritage and the history of the women in her family, with her great-grandmother having supported her family by nail making in Lye, in the Black Country, near Birmingham in the UK, and her grandmother by working as a cook in a large country house.

Before being published by Orion, Juliet wrote three historical novels for Honno, the Welsh Women’s Press, reaching #4 and #5 in the UK kindle store.

Juliet lives in a traditional quarryman’s cottage between the mountains and the sea in beautiful Snowdonia, in Wales in the UK, and is to be found dog walking in all weathers, always with a camera to hand…

My first ever psychological thriller is now on preorder for only 99p.