This week I’ve invited fiction author Colette McCormick over to the blog today. Colette is interviewing Daniel Laither, the protagonist from her contemporary romance novel, An Uncomplicated Man.

Let’s find out a bit more about the book.

What if the man in your life isn’t who he says he is?

Daniel Laither is a mild-mannered and uncomplicated bank manager, but when his boss asks him for a favour, things begin to get tangled. Introduced to businessman Arthur Braithwaite, Daniel reluctantly agrees to a financial arrangement that will create an unbreakable link between them.

When Daniel meets Lucy, Braithwaite’s daughter, he becomes a man obsessed. From the steamy afternoons spent together in hotel rooms, to evenings out with Lucy in fancy restaurants, Daniel’s life moves a million miles from the one he’d had.

He finds himself lying to his friends, his colleagues and, most importantly, his wife. He borrows money from a loan shark to afford this double life, but when the debt demands to be paid, he contemplates stealing from the bank. When Lucy falls pregnant and Braithwaite insists upon a marriage, Daniel has to choose between his two lives…

Review of An Uncomplicated Man

You can get the book here:

Now I’m passing you over to Colette, who is ready to interview Daniel.

Why do you have such a problem with being called Danny?

I don’t have a problem; I just like people to use my given name. My birth certificate says Daniel and so that’s what people should call me. I don’t understand people’s obsession with shortening names. It’s as simple as that. It’s what my mum called me.

Do you blame yourself for what happened?

Obviously, I should have behaved differently so I am partly to blame. That said, I don’t think that any of us were innocent. I include Isobel in that statement.

Did you love Lucy?

Who wouldn’t love Lucy? She’s a young, pretty, rich nymphomaniac. No seriously, I needed her. I couldn’t get enough of her. She was like a drug that I was addicted to. If that’s the definition of love then yes, I loved Lucy.

What are your thoughts on Arthur Braithwaite?

I hate him. None of this would have happened without him. He’s a user. He used me and to be honest, he used Lucy. Not that she’d ever admit that because she adores him. She can’t see him for what he is which is a flash bloke who will use anyone and do anything to get what he wants.

Could you ever have imagined that things would turn out the way that they did?

Never in a million years. I am not the person that I became. Before this, the most exciting thing that I’d ever done was…well nothing. I’m not an exciting kind of man. Isobel described me as uncomplicated but for that I think you could read boring.

I’m honest, I’m steady and I’m reliable or at least I used to be. Now I don’t know. I don’t recognise myself sometimes.

Of course I am although some might say that I’m only sorry that I got caught out.  That’s not the case at all though, I am very sorry for the hurt that I’ve caused to those that trusted me. They deserved better.

What does the future hold for you?

A change of career for a start. After that who knows? I have a lot of bridges to try and rebuild but I fear some of them may be beyond repair.

Intrigued? Want to find out more? You can buy the book here:

Originally a city girl, Colette has made her home in a one of the many former mining villages in County Durham. When not working as a retail manager for a large children’s charity she will more than likely be writing, even if it’s only a shopping list. She also enjoys cooking, gardening and taking the dog on long walks in the countryside near her home. She has been married for almost forty years and has two grown up sons.

Colette McCormick on Books and Life in General

Lovely to talk to you and Daniel, Colette. I hope your book flies off the shelves!

Welcome to my new ‘Meet The Characters’ blog. To kick it off is popular crime author, Lorraine Mace, who is interviewing D.I. Sterling, the protagonist of the gripping D.I. Sterling thrillers. D.I. Sterling is currently solving more crimes in the fourth in the series, Rage and Retribution, which will be available 13 February.

First let’s find out a bit about the book 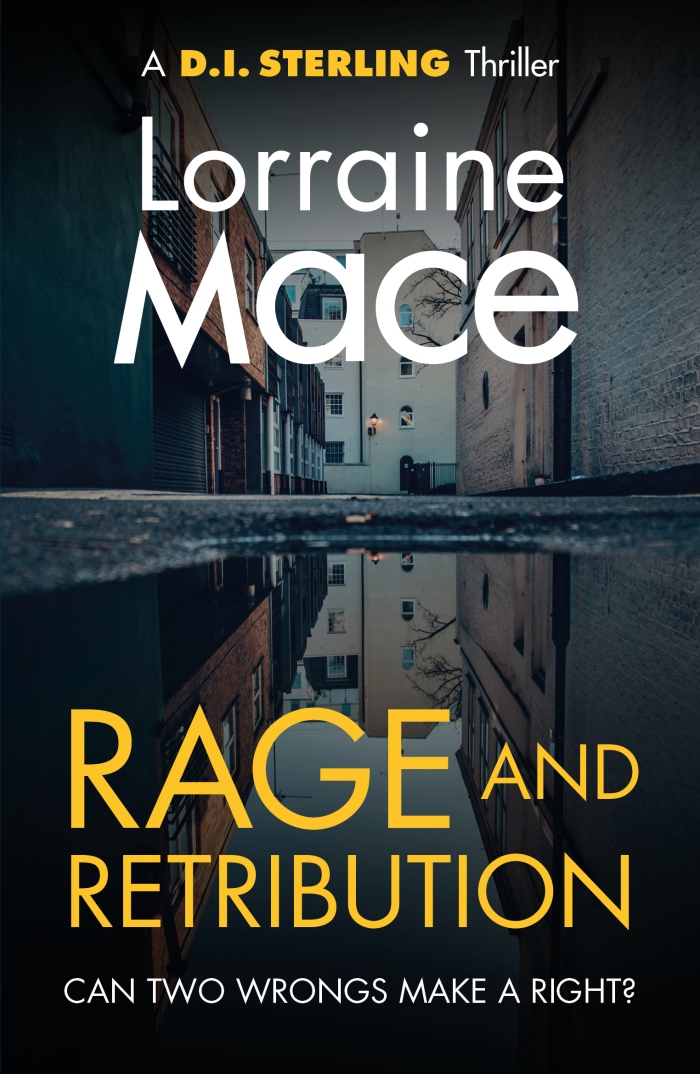 Can two wrongs ever make a right?

A man is found by the side of a canal, comatose and brutally attacked.

It quickly becomes clear that someone is abducting men and subjecting them to horrific acts of torture. After three days they’re released, fighting for their lives and refusing to speak.

A councillor is accused of fraud.

Montague Mason is an upstanding member of the community. That is until he’s publicly accused of stealing the youth centre’s funds – an accusation that threatens to rip through the very heart of the community and expose his best-kept secret. But how far would he go to protect himself?

As the two cases collide, D.I. Paolo Sterling finds he has more questions than answers. And, when torture escalates to murder, he suddenly finds himself in a race against time to find the killer and put an end to the depravity – once and for all.

‘A dark, cleverly plotted tale . . . I was gripped from the opening scene and raced through the book to its final, shocking ending. Crime writing at its very best‘ Sheila Bugler

Hooked? You can buy the book here: https://amzn.to/33wkbLI

Over to Lorraine’s interview with D.I Sterling.

Thank you for finding the time to talk to me, Detective Inspector. Can you describe yourself to me.

I’m just over six feet tall, have dark brown hair, hazel eyes and scar on my cheek in the shape of a crescent. I have my Italian mother’s olive complexion, but my Scottish father’s features.

How did you get the scar?

Many years ago, a criminal I was chasing threw a full can of beer at me as he ran. It hit me in the face and the rim cut into my cheek, leaving me with the scar. It bled so much, by the time I caught him I looked like I’d been through an abattoir.

What would you say was the defining event in your life?

My daughter was killed in a deliberate hit and run. I had my back to the car, but Sarah was facing it and saw the driver aiming for me. She pushed me out of the way and the car hit her instead. She saved me, but died in my place. I haven’t yet found the driver of the car, but I will one day.

Did you turn out the way you expected? The way your parents predicted?

My mother died when I was quite young, so I don’t really know what she would have predicted for me. My father wanted me to go to university and become a doctor, so I definitely didn’t live up to his expectations.

What moves you, or touches your soul?

Seeing my other daughter, Katy, smile. She looks like my mother and when she smiles the entire world lights up.

What are your strengths?

I never give up. I cannot bear to let criminals get away with anything and want to hunt down every last person who has preyed on another human being in some way.

What are your weaknesses?

I suppose it’s the same as my strength: I never give up. I don’t know how to let go of lost causes.

If it were possible, what superpower would you have?

That’s a difficult one. I think I’d like to have super hearing, so that I could eavesdrop on lowlifes and stop them before they commit their crimes. But that would also mean I’d hear things I shouldn’t, so maybe that’s not such a good idea.

I shut down and wouldn’t let anyone get close to me after Sarah died. As a result, my wife had to deal with her grief alone. She has never forgiven me and I don’t blame her. I’ve never forgiven myself for adding to her pain.

What are you most afraid of?

Losing my other daughter. It’s a bad world out there and she’s already been through so much. If I could wrap her in cotton wool, I would, but she wouldn’t thank me for it. She’s a very feisty young woman.

What, if anything, would you change about your life?

I’d go back in time and give Lydia, my ex-wife, the support she needed after Sarah died.

Born and raised in South East London, Lorraine lived and worked in South Africa, on the Island of Gozo, and in France, before settling on the Costa del Sol in Spain. She lives with her partner in a traditional Spanish village inland from the coast and enjoys sampling the regional dishes and ever-changing tapas in the local bars.

Her knowledge of Spanish is expanding. To stop her waistline from doing the same, she runs five times a week.

When not working on the D.I. Sterling series of crime novels, Lorraine is engaged in many writing-related activities. She is a columnist for both Writing Magazine and Writers’ Forum and is head judge for Writers’ Forum monthly fiction competitions. A tutor for Writers Bureau, she also runs her own private critique and author mentoring service.

Thanks for dropping by to talk to us about your super book, Lorraine. Wishing you many sales.